The original Warsaw bootleg was pressed by someone who worked in London's Portobello Market using a tape bought from a music industry contact. 500 copies were pressed in the US and shipped across to the UK where the sleeves had been printed.

UK bootleg released 1980/81
Black vinyl
500 copies
LP has Narrow matrix area and small matrix numbers: RZM-200-A  RZM-200-B
7" EP has matrix numbers: RZM-100-A  RZM-100-B in very small letters, particularly on side B
Laminated LP sleeve, with the tiny white circle pressing error on the front. Over the years this laminate has shrunk back by about 1mm

Note this listing is replicated on the main Warsaw page

British bootleg. Black vinyl with free black vinyl 7". Black and white glossy sleeve. "Warsaw" on spine. Wide run-off grooves and the matrix number in LARGE letters. Has RZM 200A/B on the left of the label - see below.
There is also a copy in a plain white cover without a single - presumably because they pressed more LPs than covers.
For many years we thought this was the original but we now believe the version with the "o" missprint on the cover (see above) was the first 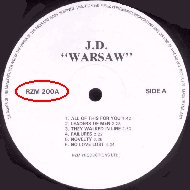 Some copies were issued in an insert cover, maybe they ran out of sleeves.

Thanks to Gerry for the scan.

The brown vinyl LP also appeared in a Walkers Brothers wraparound sleeve which we have listed separately below.

Reissue of the LP above with hand-folded poster with the "Unknown Pleasures" logo plus the words "Unknown Pleasures" and "FACT 10". The LP label says "J.D. 'Warsaw", lists the tracks, and has "RZM PRODUCTIONS LTD." at the bottom. The only version of this we have come across has no free single.

Thanks to Lisa for the scan

Plain white sleeve
Multicoloured vinyl. Both records are unlabelled and the base vinyl colour is clear with lots of different coloured specs or splashes.
This probably came out in the 1980s

US LP. Available in blue or black vinyl. No single. This version has the same labels as the one of the early pressings. Non glossy sleeve. No "Warsaw" on spine.

This may have the same matrix number (Warsaw) as the LP above but it's a different pressing - there
is a slight difference in the way the matrix numbers are written.

Light purple / pink labels. Same sleeve as the ones above.
Black vinyl. Re-pressed on white vinyl in 2006
This version has no matrix number.

Matrix: JD WARZAW A and JD WARZAW B - notice the "Z" rather than "S" ("hand-written", not stamped, in large letters)
Very dark purple labels. Same sleeve as the ones above.
Black vinyl.

Probably an American picture disc. The sides are reversed - matrix RZM 200 B is on the picture side
and RZM 200 A is on the tracklist side. This version does not have "WARSAW" below the image on
the picture side, and it's got a clear "circle" around the outer edge.

WARSAW (Picture Disc LP)
Matrix number: RZM 200 (no additional number in the centre where label should have been)

Thanks to the incubation web site for the scans. Scans are of photocopied inserts.

The record & labels are identical to the reissued Box File "Warsaw" LP; the labels are black on green, and depict a drawing of a man reading a newspaper (same on both sides). The matrix number/run-off groove notations are JD-3 (side 1) and JD-4 (side 2). The track-lisiting is the same as the original (and Box File) version.

It appears that all three of the records in the reissue of the box set have been released individually in poor quality covers. Maybe they ran out of boxes.

Available in four different colours: blue, red, green, or yellow vinyl. The sticker on the front cover is the same colour as the vinyl.
Matrix RZM 200 - handwritten but different to previous versions so this is a new pressing.

This LP was later included in The Early Years Box

This LP has different tracks from all the other Warsaw LPs on this page.

Grey marble vinyl. Plain white labels, plain white sleeve with a 21,5 x 15 cm glued-on picture on the front.
Approximately 20 copies made.
This appears to be a copy of the Retropop Warsaw LP

Matrix numbers: "RZM-200-A and RZM-200-B
Pressed on chocolate brown vinyl
Australia / New Zealand issue from 1980 / 1981
Plain sleeve with glued on photocopied insert featuring the Walker Brothers (which wraps around covering part of the back cover)

We have only heard of two copies in this sleeve. The brown vinyl LPs are the same pressing as the top listing on this page.  One of the two copies also included a blue vinyl version of the EP with the following tracks:

Dave Holden in New Zealand owns the one with the blue EP. He bought it as part of a job lot of  250 collectible LPs and singles that had formerly belonged to a DJ and talk show host who'd accumulated a lot of rare and promo vinyl in the 1980s.

Some Ebay sellers attempted to pass this off as a Record Store Day release at highly inflated prices.