Side 1 begins with a recording of a Gregorian Chant and side 2 ends with one.

There are at least 2 different inserts. One is folded and printed both sides with 3 different pictures scan 1 scan 2, the other is a single A4 sheet printed on one side with one (completely different) picture. Both inserts have songs and location info.

When this was first pressed it had the wrong B side. The B side featured Joy Division at Blackpools Imperial Hotel July 27 1979 and some 1980 demos by Orange Juice. Some of these were still sold as Black Souls but in a hand written cover - see the listing below - the others were sold as the Shades of division - The Black souls mispressing album LP. Even later this mispress album was repackaged as Space.

Made in Denmark November 1984. Less than 50 copies! Plain white cover with Joy Division Black souls handwritten on it.
Source: Live. 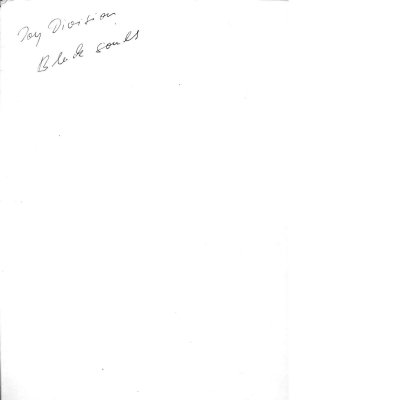 Side 1 begins with a recording of a Gregorian Chant and side 2 ends with one.

This is a mispress of the album listed above - and was later issued under other names. See above listing for details.